#KeepingItPeel – 10 Years Since He Departed 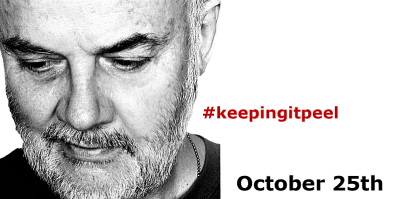 All the time we have musical anniversaries but some the fact that the late John Peel died ten years ago today is a poignant one. I’ve stated it many times and will continue to do so that without his shows back in the seventies onwards I doubt my music collection would be a good as it is now. The man was sponge for new music and artists. With his show you never knew what you’d get but you knew he’d always let your ears hear something that you needed to have yourself. Without him I doubt the indie music scene would have evolved as it did. The one thing I know I miss those early days under the covers with my transistor radio tuned in late at night listening to whatever he played. Why not go and check out the very informative website dedicated to him #keepingitpeel. Like me you’ll probably remember a lost memory of a piece of music. So go and enjoy your John Peel Day too.

1 Response to #KeepingItPeel – 10 Years Since He Departed