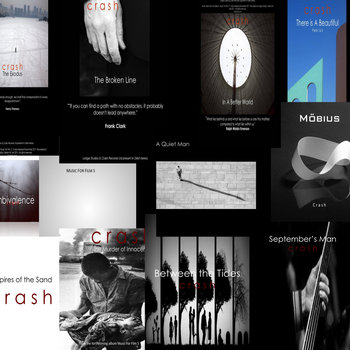 As the title suggests this is the fifth instalment from Mike Beever (aka Crash) in the series of Music For Film. Not to be rushed the former Coldplay producer now resides in far-flung New Zealand and the music certainly benefits from all of these factors. The contrasting twelve instrumental tracks will test your senses and hopefully like me wanting more of the same. For those unaware of the previous four albums check out his website, there is even a free remix album download (tracks taken from those albums) to further whet your appetite.

His instrument of choice is the piano which he plays so eloquently on the opening track ‘The Exodus‘. It’s the sort of music you’d expect to hear in a Bond movie whilst our hero sits in some classy hotel bar. ‘The Broken Line‘ is far more complicated and is rushing at you at pace whilst the piano is now surrounded by a myriad of keyboards. To help you get your breath back ‘In A Better World‘ once again slows things down a little though the beat did echo of Tears For Fears track ‘Everybody Wants To Rule The World‘. Is that such a bad thing? Next up though is the piece of music which defines this album. Set in two distinct parts ‘This Is A Beautiful I & II‘, the first is calm sophisticated and then suddenly the song breaks free and turns into a monster for the final two minutes. With crashing drums and illuminated synthesised sounds it demands you listen to it.

Keeping the pace up is ‘Ambivalence‘ which has that Simple Minds instrumental classic ‘A Brass Band In Africa‘ feel to it with its sliding soundscapes. The piano again plays a pivotal role in ‘The Simple True (Theo’s Theme)‘, another masterpiece of creating such drama within itself. It builds up with sudden peaks as you’re waltzed around some imaginary dance floor. ‘A Quiet Man‘ is quite departure from all the previous music on here as it sounds like a television theme score. You can picture some seventies open-topped sports car driving along a coastal road with the crashing symbols portraying the waves coming to shore. Some sleek guitar breaks can be heard on ‘Möbius‘, it’s very sprite and upbeat throughout.

‘Empires Of The Sand‘ again touches on the same vein of music ‘Ambivalence‘ skirted around earlier. Though a far more stronger grain of sound does emerge from its inception. Whilst ‘The Murder Of Innocence‘ sounds more like a basis for a pop song that just needs some wistful lyrics to complete what already is a stunning piece. As this collection ebbs towards the end ‘Between The Tides‘ sails along a river of dream like sounds guided again by those pristine piano keys. ‘September’s Man (Leaves No Shadow)‘ signals we’ve come to a conclusion, this is one of those end of movie title tracks where everyone lives happily ever after and the cast names are scrolling up before us. As a project this sounds a lot more personal but it still holds true to the brand. Just waiting on a director to sign it up. 9/10.