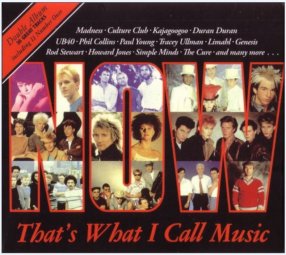 It’s actually hard to believe this series is still going let alone celebrating its 30th year. I remember the first album well as it tied in with me moving from Corby to Rugby at the beginning of November back in 1983. It amassed all the hits for the previous three months including eleven number one songs, which was totally unheard of before this. Three labels E.M.I., Polygram and Virgin had got together to devise this series which as you can see has stood the test of time. Whilst  labels Sony and B.M.G. later tried to copy with the series entitled ‘Hits‘ but it fell by the way side a few years later. This series has gone from strength to strength and today we’re on number 86. They also have highly successful spin-off collections such as the ‘NOW Christmas‘ set and best of genre’s of music too.

Prior to this hits compilation we had those tacky K-Tel or Ronco TV advertised albums which were often recorded at a poor low-level and had edited versions of the song. Whereas the ‘NOW‘ series, it truncated name for ‘Now That’s What I Call Music‘, was the real deal. Many record shops at the time did think it would kill the Singles market, but if anything it enhanced it in reality. I do remember the early albums had that annoying pig character on the covers and advertisements. Whoever first thought it up I’m sure household up and down the country who have piles of these discs lying around would want to thank them.