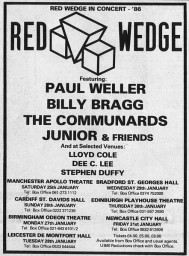 Politics and music have always had an association, sometimes it was the only way for the youth to express themselves. Back in 1986 The Labour Party found support in the name of a group of musicians under the moniker of ‘The Red Wedge‘ highlighting their politics to the young people of the country. They toured the length of the land playing music but with a strong message against the then government led by Margaret Thatcher. I attended the Birmingham Odeon show where we thought we could help affect the next election in 1987. Sadly it didn’t, but the enthusiasm of the artists was there for all to see.

The actual shows brought together a great diversity of talent that included The Style Council, The Communards, Billy Bragg and Junior. Added to this guest appearances from members of Madness, The Specials, Lloyd Cole, Elvis Costello and many more, made it a great musical event in itself. I remember leaving the venue with an air of hope and a large handful of leaflets. Since then we’ve not really had another tour in this country for political reasons on this level of awareness. Maybe the time is right again with the apathy that can be seen towards the people who run this country. I doubt it would happen though.