This their third album, ‘Big TV‘ by White Lies, I have been waiting for expectantly ever since acquiring their last record ‘Ritual‘. This was fuelled even more by the free download of ‘Getting Even‘. As a three-piece band they can create such a big sound and with such a powerful voice in the shape of Harry McVeigh to help out, they have a winning formula. They do remind me of another much under-rated band from the early 1980’s, Music For Pleasure who also could also fill up any room with their sound. 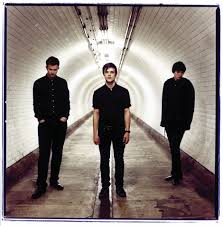 The title track ‘Big TV‘ lyrics begin with “Slow… I’m going to settle down slow“, which what this album does before you hear their distinctive sound kick in. Thundering drums and swirling dark keyboards are the order of the day my friends. Touted by some including myself, ‘There Goes Our Love Again‘, as a possible single this a much more breezy lighter affair with a repetitive chorus which is fit for an encore when played live, just add hand claps. ‘Space I‘, is a short electronic instrumental that leads smoothly into ‘First Time Caller‘ a slower song that has some slick guitar riffs along with another catchy chorus. But like all their music it does carry a bite too.

Great bass sounds from Charles Cave herald the beginning of ‘Mother Tongue‘ a powerful piece of work and uses Harry’s escalating vocals to a tee. Everything is kept in time by Jack Lawrence-Brown pounding on the skins. The aforementioned ‘Getting Even‘ slides into place next and is such a perfect power pop song. It has everything in it with drama in the delivery and rhythm when he sings “….better start believing“. I do believe that they’ll become famous sooner rather than later with more radio airplay. An atmospheric muffled piano sound announces that we’re now listening to ‘Change‘ a real dreamy ballad that sits perfectly here. A romantic theme that will have everyone’s mobile phones out waving above their heads at a venue near you soon.

Back to their bread and butter, ‘Be Your Man‘, is rocking from the onset in fact the drums do sound like a speeding train. I keep harking back to Harry’s voice as it is such an instrument which can go up and down the octaves at what seems with little effort, many a singer would die for that ability I’m sure. To let you get your breath back we get our second instrumental interlude with ‘Space II‘. Unlike its title ‘Tricky To Love‘, you can’t help but do the total opposite. It’s a far more sparse sounding track than what surrounds it,  but it certainly works just as well. For me ‘Heaven Wait‘ is for me their jewel in the crown with this collection of songs. It has everything that’s distinctive in White Lies. In the lyrics he asks us to take this weight from me, with this album I think the weight of expectation will be lifted and realised.

‘Goldmine‘ a good old rock’n’roll song ends this album, an album which will be plundered by radio folk as there’s plenty to wet people’s appetite within. “….Better late than never” we hear and I’m sure if this is your first taste of them, then what a good way to discover what’s been simmering just under the top table in the pop world. Though ‘Big TV’ as an album doesn’t actually add to what the previous record gave us as that was just as awesome, it does solidify what they have achieved thus far. It also shows they are not no one hit wonder, a band I hope will be around for a long time making music. 9/10 memorable.