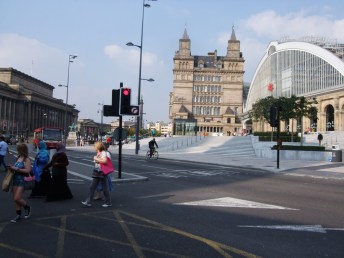 I travelled up to a very windy Liverpool and met Phildel at Lime Street train station for her first ever visit to the home of British music. She was instantly blown away by the vista she saw on emerging from the building. We walked and talked on our way down to the BBC Merseyside studios for a session with Dave Monks. The staff were very friendly on arrival. Phildel made some time then to tune up her various instruments and sound checked several times the songs that were to be recorded for the broadcast.

On greeting Dave we proceeded into studio 2 and discussed what was to happen and he set the recording levels for the microphones, thankfully one wasn’t near me. The headphones went on and the interview started as the studio lights indicated ‘live’ recording in progress. Phildel introduced herself and played a magical version of ‘Holes In Your Coffin‘ whilst playing the ukulele, an instrument she’s not played in a while. I was also impressed with Dave’s interview, as he had clearly done his research into the artist. Phildel noted this too on speaking about it later. For me this was her best live session to date as he was keen to make sure the sound was just right for her. The session concluded with ‘Storm Song‘ this time played on the guitar. It was strange seeing her perform these songs without her keyboards, but she was just as comfortable with that. Note: I took that photo not a shaky hand in sight.

After the recording we spoke with Dave about various options for a concert in Liverpool, something Phildel stressed she’d like to pursue. On leaving the studios we then walked down to the dock area. We were greeted by many military boats moored up for the weekend’s naval events. It was such a pleasure to see her face on seeing the architecture of our surroundings including the Liver Building. It was a place she stated could be so inspiring to formulate future compositions, I would have to agree with her on that. Later we found a lovely restaurant, Bistro Pierre, and spoke over dinner about her future plans including her trip to the United States and forthcoming festivals. Tomorrow she’ll travel a short distance to Manchester and meet up with her band play at the Dot To Dot Festival. I’m lucky to count these people as friends which made today’s experience all the more enjoyable.

Album Review : Disappearance Of The Girl