Continuing in this occasional series made possible due to the wonderful exploits by some wonderful You-Tube Up-loaders. I want to highlight some of those bands that John Peel had recorded sessions for his show over the years. 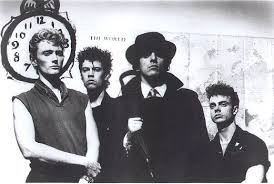 Today we have Jaz Coleman’s band Killing Joke, whom I saw on many occasions live during the 80’s. Whilst I think of it whoever has my size 10 left foot DM shoe which I got separated from at the Warwick University gig on 15 February 1985, can I have it back please. They were a powerful sounding band helped by Youth on bass. Who can forget when Jaz went AWOL and the band appeared on Top Of The Pops with someone is a space suit standing in for him and leaving drummer Paul Ferguson doing the miming vocals. It seemed Geordie kept the ship afloat more often than not. The final session here I remember playing it to death when I recorded it my cassette deck, as to me that was their finest 15 minutes at the Maida Vale studios.