I came across Stealing Sheep on seeing them provide a wonderful supporting set last year in London for The Wild Swans at Bush Hall. I have sinceheard quite a few tracks by them on Dave Monks BBC Merseyside show. Now I am in possession of their debut album. Comprising of Rebecca Hawley (vocals, keyboards), Emily Lansley (vocals, guitar) and Lucy Mercer (vocals, drums) they provide some great harmonies on this record along with some quirky sounds. 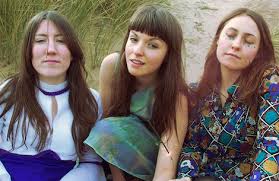 ‘The Garden‘ is a subdued affair heavy in sound topped with light vocals that blend well. Their sound does remind me of The Ravishing Beauties, a heavenly blast from the past. The airy ‘Shut Up‘ breathes life into the proceedings and the multi vocals work well here backed by the bouncy beat. Whereas ‘Rearrange‘ veers off back to the darker side. “Can we wait till morning.. so we can see it clearly” they repeat, it’s all clear to me as it demands your attention now.

The almost military drumbeat of ‘White Lies‘ is a more sparse yet no less intriguing with the eerie synthesised sound keeping you on track. ‘Genevieve‘ is a real pop gem within the set. They sing “..you’re so confusing“, far from it as it has your hands clapping to the beat. In stark contrast ‘Circles‘ reverts back to their more intense medieval sound only to be truncated by an upbeat section then lapse back again. It certainly does keep your senses alert. I’m a little than unimpressed with ‘Gold‘ though, but hey-ho they can’t be perfect all the time. Maybe I’ll come back to it again another time.

‘Shark Tone‘ resumes normal service for me, catchy rhythmic lyrics and sensitive sounds prevail. I particularly like the guitar on this one as it’s reminiscent of Andy Partridge‘s style. ‘Liven Up‘ does as it suggests, they sing “time to tell you need to cast a new spell” again shows how well three voices can be better than one. The hand-clapping ‘Tangled Up‘ is far from it as the sounds do all sound free and easy to hear. The deeper sounds of ‘Bear Tracks‘ gives great imagery of a bear. First it ambles slowly then in a split second it pounces into action to seize its prey, your ears. It lists this as the last track but there’s a hidden one tacked on at the end, a lovely piano tune. They certainly have generated harmony in my hair 8/10.

1 Response to Review : Stealing Sheep – Into The Diamond Sun