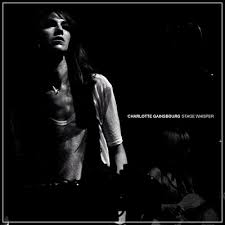 What I like about this French singer apart from her angelic voice is the fact she never sits on her laurels. This album ‘Stage Whisper‘ is a two CD affair, disc one is a studio album and some of the tracks were again produced by Beck whilst the second disc contains live material recorded on her recent US tour. That said it comes hot on the heels of the magnificent ‘IRM‘ album so anything would pale insignificance to that piece of work by her.

The opening track is strange one for her I thought I’d put a Goldfrapp album on by mistake. The song in question is ‘Terrible Angels’ a real electro blaster surely destined to be on quite a few alternative nite club playlist at some point. Whilst ‘Paradisco’ is less intense but no less vibrant and relevant to today’s ambient dance scene. Production of ‘All The Rain’ uses heavy backing sounds which prevails throughout the song which is topped by Charlotte’s vocals eloquently. In fact the sound reminded me alot of the heady days of The Cure circa ‘The Top‘ album which is quirky but still in fashion.

‘White Telephone’ though falls back to the sumptuous sounds to be found on previous outings by the singer. A breezy tender feel with each note crystal clear. Wheras ‘Anna’ uses cool choral vocals which gives the impression this song was lifted from some unknown musical from the late 60’s, this is her next single to be released in early January. Next up features Noah and the Whale’s Charlie Fink sharing the vocals on ‘Go To Let Go’, which is sure to draw new fans of Charlotte Gainsbourg’s works.

‘Out Of Touch’ does though seems to be an album filler, less said the better really as it drifts aimlessly along till it grinds to a halt. The album finishes off with the acoustic ‘Memoir’ which is sure to please purists of her music. As a bonus the live album musters up some great renditions of ‘Just Like A Woman’, ‘The Song That We Sing’ and not to mention ‘In The End’. A previously stated not in the same league as her previous album but still worth the dosh for a double album. 6/10.