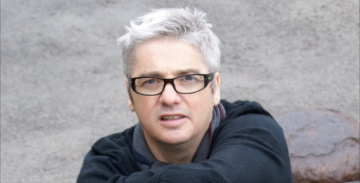 Having known and met JJ Gilmour many times during his stint with the Scottish band ‘The Silencers‘, I was pleasantly surprised to see he has a new album ‘Slocomotion‘ out on 2 April 2012. I have some fond memories of Jinky, all of us playing footy prior to the gig in Motherwell on the ‘Dance To The Holy Man‘ tour back in 1991. He along with Jimmie O’Neill, Cha Burns (RIP) and David Crichton raided my shop of music for the tour bus before their less than well attended Northampton Roadmenders gig. I was also press-ganged by my good friend Bruce Findlay to help run the Silencers Info Service for a couple of years when Sue and Mark didn’t have time to continue managing it.

So as most record labels now only sign acts that are the flavour of the month, be on a reality TV show or have a huge back catalogue of material. Thus getting a deal has become very hard acts therefore either have to release download only albums or record and release an album themselves. Anyone who knows about doing the latter will know this isn’t cheap, recording studio time, promotion (limited), pressing up the album and the packaging the product and not to mention distribution. Though alot of bands sell their discs online via their own website with parallel download versions, the last Wild Swans album release comes to mind (lucky they have a good independent label helping them). Did I say he has a great voice too and his footballing skills won’t too bad either back in the day!

Mr. Gilmour (or maybe his management if he has any) have decided to pre-order his new album with some nice incentives. In gratitude of us parting with £14.99 you’ll get a bonus acoustic disc of material, your name in the CD booklet and a personally signed message by Jinky. Obviously the more people who order it will help him to pay all the aforementioned outlay. What a great idea lets hope more acts do this, some may already have done so (Marillion comes to mind, but not 100% sure). Those Scottish folk don’t ‘arf count their pennies, only joking. So have a listen to some samples of Jinky’s music and if its your bag take a risk. Read the official blurb below too for all the details. I’m going to order mine, hope others do too.

Note: both The Silencers and JJ Gilmour are playing pre-Christmas 2011 Scottish shows.